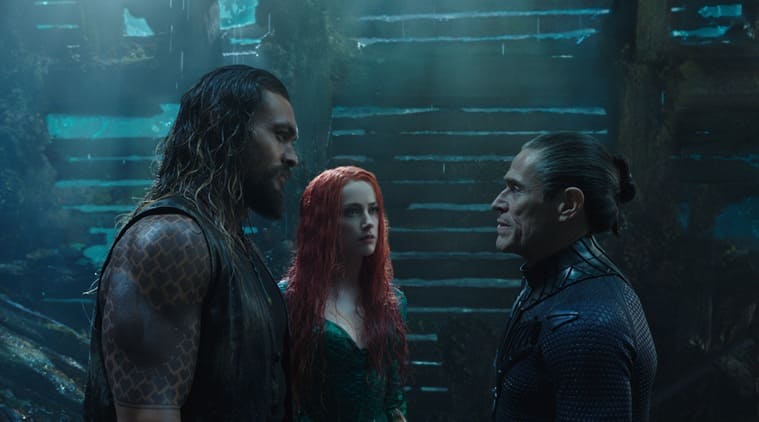 As of 2018, the unofficially named DC Extended Universe film franchise (DCEU) has produced exactly one film that can reasonably be called “good,”—in the form of Wonder Woman—out of its five total. The rest have been emotionally hollow, dispassionate, and/or incompetent trainwrecks that either make some attempt at genuine artistry and fail by their staggering delusion and questionable morals (Man of Steel and Batman V. Superman), or make no such attempt and instead prioritize the commercial viability and franchise value of the film in hopes of building a base for a money machine to rival the Marvel Cinematic Universe (Suicide Squad, Justice League). Wonder Woman was an exception, of course, though not the perfect redemption of the franchise or genre that it was made out to be.

From the marketing and other production details, Aquaman looked like something DC hadn’t quite tried before. The trailers were zany, colorful, fantastical, and most distinctly, fun. On social media, Jason Momoa drinks beer, throws tomahawks, and relishes his position as a sexual icon for comedic effect. James Wan is a well-respected action and horror director, and it could be presumed that his experience with the Conjuring and Fast and the Furious franchises would lend themselves toward an imaginative, entertaining comic book film.

As such, I think it’d be easy for some to get excited about Aquaman. That’s not how I would’ve described myself, but I was admittedly intrigued by the tone of the trailers and hopeful that the U.S.S. DCEU could be turned around. It looked to be the first DC film that is good, fun, and balls-to-the-wall comic book-y all in one.

In that regard, I can safely report Aquaman as a false alarm. It ain’t good. It’s kind of fun at times, but only in brief moments between long-winded blocks of uninteresting exposition spouted robotically from the ensemble cast. The only one of my three hopeful boxes that it truly checks off is the unbridled comic book-iness. That’s great and all, but looking like a comic book is hardly enough to make an enjoyable movie.

I won’t go into all the details of the story, mostly because the film will repeat itself enough, and I don’t want to subject you to any more regurgitation than you’ll have to endure anyway. Thomas Curry (Temuera Morrison) is a modest lighthouse keeper, and Atlanna (Nicole Kidman) is the queen of the lost undersea city of Atlantis. Fate brings them together, and eventually fate forces them apart, but not before conceiving Arthur (Jason Momoa), who inherits an unspecific collection of superpowers. Arthur grows up to be a burly, surly ruffian (probably the only character Momoa knows how to play) who roams the seas and stops pirates and other baddies on his own terms. He is aware of Atlantis, of course, but has opted mostly to stay away, feeling unwelcome there after his mother was apparently executed for having relations with a surface-dweller.

Meanwhile, Arthur’s half-brother, Orm (Patrick Wilson), intends to assert Atlantean control over the seven kingdoms of the ocean, in order to force a military union in an assault against the surface, mostly because we pollute the oceans. His betrothed, Princess Mera (Amber Heard), secretly disapproves of Orm’s militaristic, narcissistic ways, and seeks out Arthur to challenge Orm for the throne and rule Atlantis and the seas with a peaceful hand.

It’s The Lion King. It’s Black Panther. It’s Thor. The plot has been seen before, and it has seen much better. Aquaman would have benefitted acknowledging the banality of its plot and focusing instead on its characters. But no, Aquaman finds its plot all too interesting and important to waste any time on emotional authenticity or depth.

Aquaman is a monolithic chore of a solo film. Clocking in at 2 hours and 20 minutes—just shy of Avengers: Infinity War, with less than one-tenth the star power and charisma—this movie feels looong. Instead of taking advantage of all that time to dimensionalize its characters, Aquaman opts to fill it with more exposition. More on the different undersea kingdoms. More Atlantean hierarchical terminology. More subplots. And most of the information we get is repeated at least two more times to make sure we understand it.

I didn’t count for comparison, but the sheer number of scenes in the film felt overwhelming. Rather than spending time to make each scene count, James Wan packs as many scenes in as he can, each with separate, useless conversations about where the characters need to go next, and no transitions between them… except for cheesy pop song montages designed to let us know that the movie is fun. The crown jewel of these is Pitbull’s “Ocean to Ocean,” a very rough and culturally regressive approximation of Toto’s recently resurrected ‘80s classic, “Africa.”

If it couldn’t be inferred already, everything in the film is a cliché. It was a similar feeling that Robin Hood elicited from me. Every line of dialogue, every character interaction, every plot point, and every joke is practically a stereotype of the adventure genre. The characters are given very little humanity. I’d say the film is full of bad acting, but it’s honestly hard to blame the cast with the paper-thin characters and elementary script they’re given.

Aquaman is a film that could be ranted on, probably endlessly. But this review is already past the “overlong” point, so here’s the good:

My guess is Aquaman will be received in a manner akin to Venom. Both are clearly messy, unorganized hack jobs with a lack of passion and heart applied to its characters, intended purely to kick off or maintain a poorly conceived film franchise, but both will be watched and embraced by audiences, in spite of their glaring flaws, because they are seen a “nice change of pace” or “something the fans have wanted for a long time.” Venom has held a dedicated fanbase of people who grew up in the edgy ‘90s, or shortly thereafter, and those people were, I think, just happy to have a movie about Venom that felt at all more like the comic character than Topher Grace’s rubbery rendition in Spider-Man 3. To boot, it was a harder, “darker” take on a comic book film (if only cosmetically) in the age of Marvel Studios, where the common cry of dissention has become that those films aren’t mature enough—as if anyone could make a founded case for Venom being a paragon of mature filmmaking.

Similarly, the marketing for Aquaman has made it feel like perhaps the breath of fresh air comic book movie fans (particularly DC fans) have needed, dropping the drab, gritty aesthetic of the DCEU and promising to just be fun and comic book-y above all else; a comparable DC counterpart to Marvel’s consistent quality and success. My presumption is that such a desire will be enough to convince fans to buy into this film, trident, line, and sinker. I’m aware this all sounds awfully condescending, but the positive audience reception to Venom has been astounding to me based on my negative experience with the film.

Aquaman manages to be DC’s second best film in this current franchise, distantly behind Wonder Woman. The action and adventurous spirit manage to keep it just barely afloat, while its writing, pacing, and lack of emotional depths tug relentlessly on its ankles beneath the surface. It isn’t good, but I think it just barely makes the cut for “passable.” If you’re particularly into superheroes, maybe give it a watch at the matinee. If you’re less invested, skip it altogether. It’s the exact kind of commercial schlock that the superhero genre gets broadly blasted for.

The Joneses
Be the first to comment!
Leave a reply »