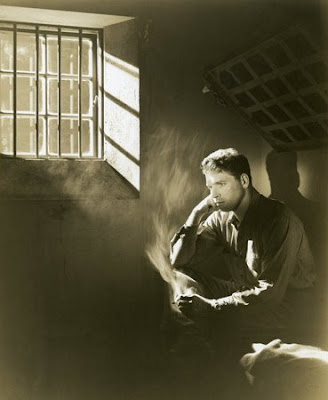 I had high hopes for this 1947 prison movie starring Burt Lancaster, but was mildly let down by it. Still, it’s an interesting enough film to make a few points about it.

One of the least successful things about the movie is also the most intriguing: A series of flashbacks as various prisoners recall the circumstances that led to them being locked up in Westgate Penitentiary. As a critic, I think it weakens the movie because it gives a lot of screen time to a bunch of minor characters who clearly are not the center of the story.

But in the genre of prison flicks, what’s notable is that all the men are guilty — up to and including the hero, Joe Collins (Lancaster). Usually in prison movies, even the best ones like “The Shawshank Redemption,” filmmakers find it necessary to provide a protagonist who’s innocent of his crimes. That gives them free rein to explore the dehumanizing aspects of imprisonment, with the hook that “it could be you,” sentenced for a crime you didn’t commit.

Not here. Every one of the flashbacks shows the prisoners willfully committing crimes, knowing it could send them to jail. One guy embezzles to buy his wife a fur coat, while another is a soldier who steals food for his Italian war bride. Collins’ racket was knocking over banks to save up money for his wife’s operation.

Another interesting choice is to have the main heavy, the prison guard Captain Munsey, depicted as an out-and-out evil character. Don’t forget, in 1947 it was a pretty ballsy thing to portray the prisoners as decent men, and their chief incarcerator as a sadist. But that’s exactly what he is.

Hume Cronyn, who I most remember as one of the lovable oldsters from “Cocoon,” gives an icy and quiet performance as Munsey. It reminded me very much of Ralph Fiennes’ portrayal of the Nazi prison chief in “Schindler’s List” — especially in one scene where he’s cleaning his rifle. This is immediately followed by a brutal scene in which the captain beats a prisoner with piece of rubber tubing.

The other main characters are a sympathetic prison doctor, who’s also a drunkard, and a prison tough named Gallagher (Charles Bickford) whose loyalties lie somewhere between Collins and Munsey. Gallagher orchestrates the prison gangs, trying to keep Munsey at bay while protecting the welfare of the prisoners. He’s not above enforcing a code of justice that lives within the prison walls, such as arranging the murder of a prisoner who planted a shiv on Collins, sending him into isolation.

Interestingly, Gallagher’s prison job is running the prison newspaper. This allows him to send his men into any part of Westgate, carrying information or smuggling contraband.

Oh, and Calypso singer Sir Lancelot has a minor role as a prisoner who narrates the goings-on through a sing-song commentary.

Anyway, they’re building a drain pipe for no good reason that I can see, and Collins comes up with the idea of using it to attack the guard tower from two sides at once. Things go horribly awry, as you might expect.

Overall, the movie just didn’t really go anyplace for me. The Collins character maintains a resolute opaqueness, and the Munsey character — once we get over the shock of his harsh portrayal — is kind of a one-note character.

I can’t say as I was dying to escape from “Brute Force,” but I wouldn’t want be locked up with it, either.

Best Picture Catchup: The Sting, Dances With Wolves, Oliver!, From Here to Eternity