previous
The Beautiful, The Bloody, and The Bare (1964)
random
next
The Damned United
movies
1037 views 0 likes 0 comments 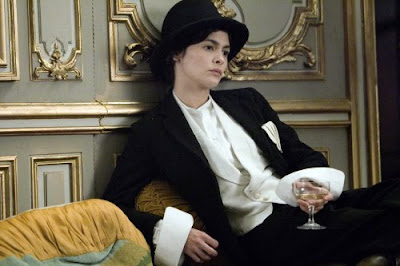 “Coco Before Chanel” has some nice elements in its depiction of the early life of fashion icon Coco Chanel. But like a strange bit of slapdash couture, they never fit together in an appealing way.

Audrey Tautou plays Gabrielle Chanel, who came from humble roots — abandoned with her sister to an orphanage by an indifferent father after their mother died — to build a business empire that still reigns, while ushering in a sea change in the way women clothed themselves.

Her emphasis on elegant simplicity and clothes that actually fit the body that occupied them rather than the other way around was revolutionary. Her tendency to borrow from men’s fashions prompted early critics to dub her styles “mannish,” and spark speculation about Chanel’s sexuality that still persist.

Director Anne Fontaine, who co-wrote the script with sister Camille based on the book by Edmonde Charles-Roux, ducks this essential question in her film. Although she is never shown having romantic feelings toward another woman, Coco answers a question about whether she prefers men or women with the terse reply, “Skin is skin.”

The story mainly centers on her relationship with two wealthy men who were both lovers and backers of her business ventures: French aristocrat EtienneBalsan (Benoît Poelvoorde) and English businessman Arthur “Boy” Capel (Alessandro Nivola).

While working as a seamstress and performing a song-and-dance routine with her sister (Marie Gillain) in a nightclub, Coco meets Balsan and begins an affair that spurs her to go to live with him, uninvited. At first Balsan exploits the situation, using his interloping lodger for his entertainment, both social and sexual.

But eventually the tides turn, and he finds he needs Coco more than she does he. This gradual shift in power is the most interesting thing about the movie, and the scenes betweenTautou and Poelvoorde have a lovely melancholy tone.

The affair with Capel, although outwardly conforming to a classic cinematic romance, is curiously devoid of much real passion.

It almost seems like Fontaine endeavors to keep the film on a smooth emotional keel, as does Tautou’s performance. Whenever the movie seems ready to open up into a grand moment or emotion, the film pulls back.

Spareness may work in fashion, but “Coco Before Chanel” could have stood a little more ostentatiousness in its moods.

The Art of Self-Defense

The Art of Self-Defense

You Were Never Really Here

A Most Violent Year