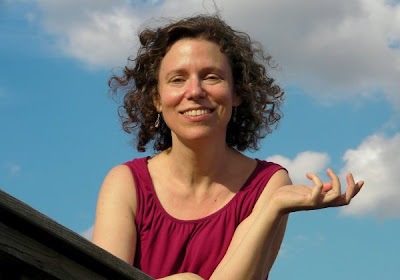 Nina Paley started out as a cartoonist, including the syndicated strip “Fluff,” which she gave up after two years because she found doing a daily strip boring. And she had discovered a new interest: Animation.“Sita Sings the Blues” is her first feature film, and is a labor of love — or rather, a labor of lost love. Paley decided to make “Sita” after the breakup of her own marriage, by telling the ancient Indian story of the Ramayana. The Ramayana is ostensibly an epic about the great hero-king Rama, but Paley turns it on its head by telling it from the point of view of Sita, his long-suffering wife.After repeatedly proving her devotion to Rama — including enduring a trial by fire to prove her purity — Sita is abandoned by Rama.Paley took things one step further by having the tale play out to blues songs by 1920s jazz singer Annette Hanshaw, and by including the parallel story of her own marital breakup in the film itelf.

CHRISTOPHER LLOYD: What gave you the idea to combine this ancient Indian mythology, animation, a 1920s jazz singer and your own experiences?

NINA PALEY: I’d say I was led by my own experiences. I had just read the Ramayana while I was in India. And my husband dumped me by e-mail while I was on a trip to New York. And then I heard the songs of Annette Hanshaw for the first time in an apartment I was staying at because I couldn’t go back (home) to San Francisco and couldn’t go back to India. Everything just crashed together in my head. I didn’t feel like I wanted to make a movie and show these things; it felt more like they chose me.

CL: Did you read the Ramayana before your own breakup or after?

NP: I read it before. I went to Trivandrum, India in the summer of 2002. I read my first Ramayana there as a comic book and I was fascinated. I was so fascinated, I started reading prose versions. And I was in the midst of reading various versions of the Ramayana when the breakup happened. And I was already fascinated with the story, but the breakup totally changed my perspective on it.

CL: Was it difficult to include your personal life in the film, particularly such a painful chapter?

NP: Originally I had no intention of doing that. It’s just that when I was talking to people about the film — which was over a period of five years, because that’s how long it took to make — they asked me so many questions about my own story, I thought, “I’m going to put the answers right in the movie so I’m not spending all my time explaining to people what led me to it.”

So putting in those sections kind of reveals … my own biases, my own experiences. ‘This is what happened to me. This is why I made the film.’ It’s right there, in the film.

CL: Five years is a tremendously long amount of time. Were you also working on other things?

NP: Well, it was three years of work spread over five years of time. Two of those years I was pretty much doing other things. It started out as a short, and I only committed to doing it as a feature in 2005. So really 2005 to 2008 was when I was working on it full time. Between 2002 and 2003 I did the short (version) while I was working on other things as well.

CL: And I understand you got a Guggenheim grant to complete work on the film?

NP: Yes, what a godsend that was! Thank you, Guggenheim Foundation!

CL: Was that the difference between finishing it as a feature film or not?

NP: Not, it was the difference between me having to move back into my parents’ house in Illinois or not. I’m from Urbana. I called my parents from the beginning and said, “If I run out of money, can I stay with you guys rent-free and finish the film?” And their reaction was, “Yes, if you don’t go crazy and kill us!” So the Guggenheim Foundation prevented that from happening.

CL: What made you decide to animate each of the sections of the film in a different style?

NP: Well, part of it was to keep me from getting bored. Before this I had only made short films, and for each of my short films I used a different style.

And some of it was to share the kind of breadth of Ramayana art that is out there. Because the Ramayana is many thousands of years old, and it’s told in many different countries in southeast Asia. And there’s all sorts of art traditions associated with it. And when I say “it,” it’s really multiple stories. There’s no single story of the Ramayana. The different visual interpretations reflect the kind of different narrative traditions around it.

CL: The credits say you wrote, directed, animated, edited and did pretty much everything else on the film. Maybe it’s easier for you to just tell me what you didn’t do on the film.

NP: What I didn’t do was the audio engineering and sweetening and sound effect designing and sound supervising. That was all by Greg Sextro. I worked with Greg from the very beginning because I wanted it to sound good. And it does!

Another thing I didn’t do was the music, which was the old songs by Annette Hanshaw or new songs that either I commissioned, for example by Rahan and Todd Michaelson, or contemporary musicians that I met who let me use their music.

And then the voice artists are either actors or second-generation Indian-Americans … and then there’s those narrators, who are not actually acting. They’re friends of mine: Manish Acharya, Aseem Chhabra and Bhavana Nagulapally. They were just having a conversation that Greg Sextro recorded.

CL: Those were the shadow puppets, who act not only as narrators but actually argue about the accuracy and meaning of the Ramayana. The line “Hence, unconditional love” had me rolling on the floor with laughter.

NP: I’m so glad! Either the audience is totally silent at that point or they laugh.

CL: Where did the idea come from to have this open-ended freewheeling discussion act as the narration?

NP: It was a total experiment. I didn’t know I was going to use it that way. I just knew that the film needed something. And I just tried it out. It was like, “Can we go into the studio and I record you?” And they said yes, and the conversation was great. I played around with it and edited it, and it was perfect for the narration of the film.

CL: The Ramayana is so enduring. Do you think it has anything to say to contemporary audiences about modern gender relationships — particularly romantic ones?

NP: I think it shows that life is hard. And always had been. That’s the comfort I got from it.

CL: Do you have any thoughts on computer-generated vs. hand-drawn animation?

But regardless of the tools, I think that the story and vision is most important, and people are doing wonderful things using all kinds of techniques. I don’t think the technique makes or breaks something.

That said, I do have a kind of nostalgia for old-fashioned hand-drawn animation, and I’m glad people are still making it.