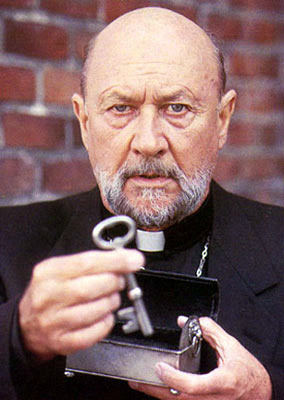 It’s Week 3 of my John Carpenter retrospective, and I’m very happy to say that “Prince of Darkness” was a huge leap for the better over “They Live.” Last up for next week is his remake of “Village of the Damned.”

(Incidentally, all four films are collected in a new DVD, “John Carpenter: Master of Fear” that’s now out. Zero extras, but for a suggested retail of a mere $16, it’s a great buy.)

As you might guess from the title, “Prince” is about the end of the world and the return of Satan to rule over the Earth. It’s a quite entertaining bit of sci-fi/horror apocalyptic claptrap, with Donald Pleasance and Victor Wong leading a group of scientists trying to fit the pieces of the puzzle together before Old Scratch takes over.

Deep in the bowels of an old church, a mysterious canister is filled with swirling green goo. It was only discovered after an old priest died clutching the key to the chamber. Pleasance, a mainstay of Carpenter’s movies, plays an unnamed priest who attempts to pierce the mystery. He enlists the aid of Professor Birack (Wong), a brilliant if esoteric scientist whose work straddles the line between physics and metaphysics.

Birack brings along a small army of students to camp out at the church and study the canister, where they are slowly converted one by one into Satan’s zombies. The evil spell is passed by vomiting the green goo from a zombie’s mouth into a human’s. It’s unclear if they’re actually dead, although two reanimate after they died as humans — one memorably so by slitting his own throat with a piece of broken banister.

For grad students, they’re a suspiciously old-looking bunch. Jameson Parker, best remembered as the blonde guy from TV’s “Simon & Simon,” was 40 when this movie came out in 1987. I guess this bunch took a rather laissez-faire approach to their studies. At the rate they’re going, they’ll be collecting Social Security by the time they make the adjunct faculty list.

Pleasance always seems to have at least one great speech in every movie he’s in, and he delivers a whopper here. After being confronted with a 2,000-year-old book that states that Jesus and Satan were extra-terrestrials and the dark one was merely banished, not defeated, the old priest does not engage in a delusional defense of his faith. Rather, he sagely takes thousands of years of religious doctrine, including his own life’s calling, and pitches it in the ditch:

“Apparently a decision was made to characterize pure evil as a spiritual force — evil within the darkness of the hearts of men. That was more convenient. And that way Man remained at the center of things — a stupid lie. We were salesmen, that’s all. We sold our product to those who didn’t have it: A new life, reward ourselves, punish our enemies. So we can live without truth, substance, malevolence. That was the truth: Asleep, until now.”

One of the female scientists is branded as the chosen one to be the receptacle of Satan’s will. She’s transformed into a gooey creature covered with sores. At first her belly swells, and we think it’s going to be a nasty demon-birth thing, but then it subsides and she rises, bent on finding a mirror so she can reach through the portal to bring the horned one through to this plane of existence.

The image of her gnarly, bloody fingers peeking through the reverse side of the mirror pane is quite striking. Another very brief but haunting image is that of a pigeon that has been caught and crucified on a tiny cross.

In one great scene, one of their colleagues who has been killed speaks to the survivors in a strange quavering voice. He opens his coat to reveal a chest of beetles, and indeed his entire body has been eaten away from the inside out by a plague of insects. Just before he collapses into a heap of empty clothes, he tells them, “Pray for death.” Cool stuff.

“Prince of Darkness” was not well reviewed when it came out, but it’s grown in stature during the ensuing years. It’s notable for the presence of rocker Alice Cooper as the leader of the zombie horde gathering outside the church. When a computer dweeb tries to escape, Cooper takes half an old bicycle frame and runs him through with it. Cooper even appears on the cover of the DVD reissue, despite not having any lines and a total screen time of perhaps three minutes.

If the film has a weakness, it’s the romance between Parker’s character and a colleague played by Lisa Blount. Their relationship is given very short shrift by the screenplay — they have one conversation and soon after they’re in bed — so it doesn’t carry much weight when Blount’s character sacrifices herself at the end to save him (and the rest of the world).